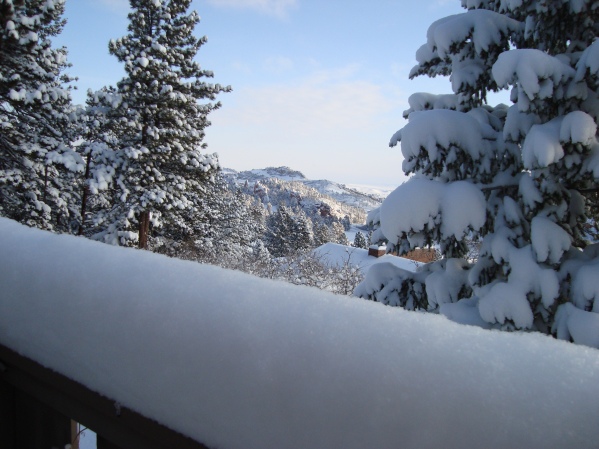 I had to get out of bed at 5:00 am, dig out my gym gear in the dark so as not to wake Missus Fender Bunny, trudge down the long and steep driveway covered with a fresh 9 inches of snow under what I was certain was the hostile stare of a gang of juvenile mountain lions eager to prove their cat macho by taking down an old man for breakfast, dig the car out of the snow, scrape the ice off the windshield, and drive icy roads to get to the Y by 6:00 am. But the reward was recognizing, over the course of a few games, some of the guys who used to play ball with me back in the day and, once I walked out of the gym, taking in the glorious view of the Front Range, covered in snow under a bright blue early morning sky.

I didn’t have my camera with me, so I grabbed a picture I took in April a few years ago. It’s not of the entire front range, but it’ll give you an idea.