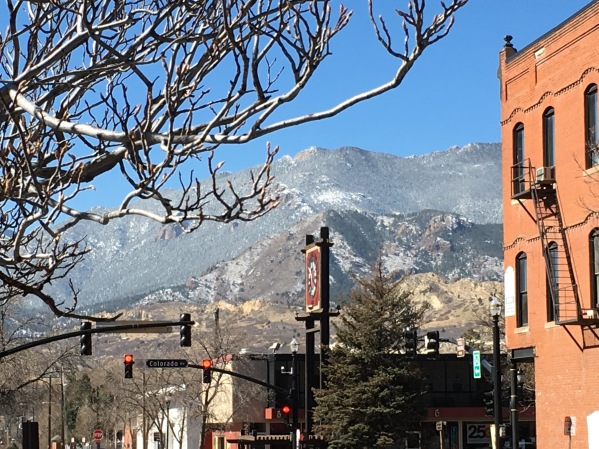 It was 16° F (-9° Celsius) when I left Perry Park at 7:45 this morning on my way to the Pikes Peak BMW Club meeting at Mother Muff’s Kitchen in Old Colorado City.

Base layer for my torso was a thermal turtleneck from waaaaaaay back in the day.  The thing is warm, itchy, and indestructible.  Next was a thin cashmere V-neck sweater.  Cashmere is warm, soft, and can be had cheap at Jos A. Bank.  The combo is surprisingly warm, but leave the pipe and David Niven accent at home.

Over the top of the sweater I zipped up another old favorite, a fleece jacket from The North Face.  Finally, my trusty Klim.

I covered by bum and netheregions in the quick-dry UnderArmor motorcycle shorts, which are, oddly enough, cozy warm.  Then a pair of Hot Chilis.  Then a pair of casual BMW riding pants with the rain liner in.  Thermal socks.  Aerostich Combat Touring boots.

Under my Arai helmet but over my Klim jacket I worse a fleece balaclava, and just about pulled my back out making sure there were no leaks around the collar.  I put on an ancient pair of Dainese winter gloves, and turned the heated grips on my R1200RS to High.

Once you get all that gear on, the only cold weather hassle left is dealing with the fogging lens on your helmet.  Easy enough to manage, though: keep helmet open until you pick up some speed, and open it each time you slow down.  The RS has the stock shield, which directs plenty of air at my helmet, so that approach worked well for me.  Dealing with fogging would be more of a hassle on a bike with a full fairing.

It was a sunny morning, but the Front Range was completely frosted over.  I didn’t take a picture, but this one is pretty close to what it looked like the entire route from Larkspur to Old Colorado City.

It took about 5 minutes for the ice cream headache to show up.  It wasn’t the worst I’ve had, but I did have to concentrate to get past it.  My setup had no air leaks anywhere, and the heated grips kept one side of my hands warm.  The topside did get a bit chilly, but never numb.  The tips of my thumbs went numb, and my feet felt about as chilly as the top of my hands.

The only other rider I saw was a guy in jeans and a hoodie riding his 600 home along I-25.  I wonder what the story was behind that early morning ride.

I felt immediately comfortable with the crowd from Pike’s Peak BMW club.  Craig, Lee, and Bex were kind enough to invite me to sit with them.  It’s always nice when the locals are friendly to the new guy.  Made me glad I rode up there.

Mother Muffs is the red storefront at the upper right:

By the time I left, temps had warmed up to the low 40’s, so I stowed my gear, slipped on my flip-flips and Hawaiian shirt, and rode home singing Gypsies in the Palace.  The temps in Larkspur were only 36°F by the time I got home (around noon), but it still felt downright tropical compared to the first part of the ride.

Old Colorado City somehow manages to hang on to its low-rent charm at the foot of Pikes Peak.  I always enjoy riding down there.