I heat-cycled my new 2017 KTM a couple of weeks ago on the ride home from the dealer. Today I took it for its maiden voyage on the trails. 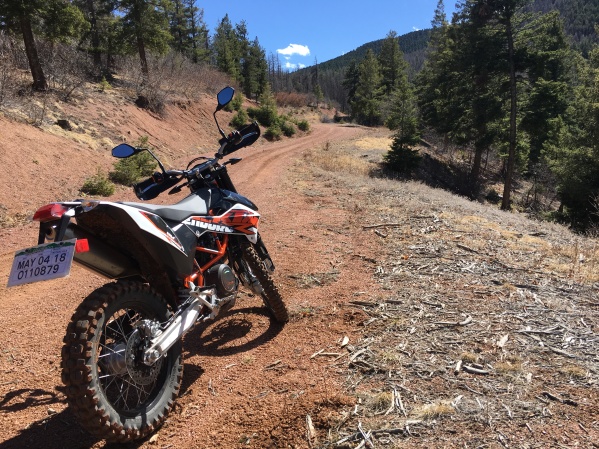 I have ridden dirt bikes, too, but I never put in the time to get better than barely competent. The Call of the Asphalt, so to speak.

For those of you who weren’t paying attention in English class, that’s a Jack London reference. Buy the book:

Although I rely on technique while on the asphalt, I’ve always ridden dirt bikes by instinct. In other words, I don’t know what I’m doing. On top of that, I tend to freak myself out over stupid things. Like mud. And sand. And boulders. Cliffs, too, if they get too close. Riding the twisties fast on a Ducati is a form of meditation. So is cruising Route 50 across Nevada on a Harley. But dirt scares me.

I’m trying to remedy that with the KTM. Partly out of respect for the bike, partly because I’m at that age when I need to rely on technique. So today I focused on weighting the outside peg while turning.

The terrain wasn’t always cooperative, but I got in a little practice, and it’s starting to feel less awkward.

Mudholes, which I couldn’t get a picture of because I was too busy staying upright, scare the heck out of me.  Especially when they have huge truck tire tracks running through them. Not only does the mud take turns grabbing and letting go of your tire, but the tracks make you pay when you cross them. I rode through a couple of sections that were each about 100 yards long, and somehow emerged in one piece. I hate mud!

A great deal of credit goes to the KTM. I’m not qualified to do a review of this bike, but here’s what I noticed on today’s compared to other cheaper dirt bikes I’ve owned:

I rode it mostly on jeep trails, with a little single track.

The higher I got, the icier the water holes got. This one finally convinced me to turn around. 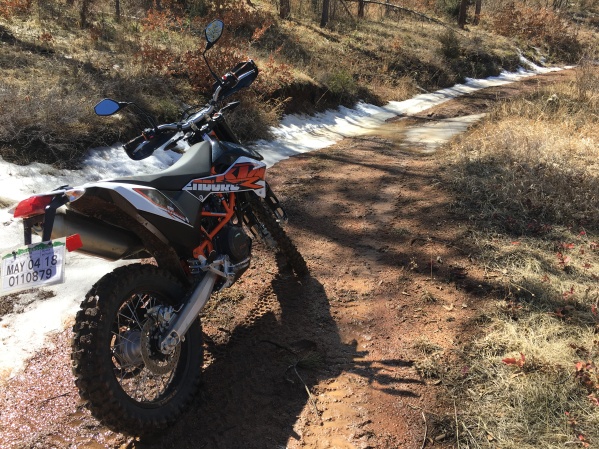 Heart Attack Hill brought back memories. I used to race my daughter Beth to the top and do grenades until we couldn’t breathe. First one to collapse lost. It was at the midpoint of one of our conditioning runs. After that sprint, the rest of the run felt like a cakewalk. Whatever a cakewalk is. This is the lower part of the hill:

It’s much easier on the KTM.

Great views from the trail. If you look closely (sorry for the bad picture quality, took it with an older iPhone), you can see the Denver skyline.